For project #8 I'm tackling the somewhat prosaically titled "Gown of cloth for a woman". This is a fairly simple coat style garment, which has a similar sleeve to the previous 2 projects, a looser fit without any shaping through the body, and is the same length both front and back with no train. I tend to think of it more as a robe or coat than a gown, but for the sake of simplicity I'll refer to it as a gown here.

I have found some which seem to be a similar type garment with some similar features, however. The most common being a type that differs in that they are cut to conform quite close to the body, rather than the loose 'duster coat' shape of this pattern, as in the portrait of Isabella Clara Eugenia, right. These are also cut much longer so that they almost touch the hem of the under kirtle, but do have the familiar sleeve style.

Similar garments also crop up in Italian portraits, cut with a familiar looser fit but some other slight stylistic differences in sleeves and so on. Bianca Capello de' Medici (see below) is clearly not a Spanish lady, but this gown seems to have some points of kinship with the pattern we are making, especially in the looser fit. There is in fact a surviving garment which is described as a Venentian zimarra in the National Museum of the Renaissance in Ecouen, France, and aside from the wide angled cut of the side seams, bears a striking resemblance to our pattern.

One of the points of difference with the gown in Alcega compared to these examples is the length. All the women's patterns in Alcega are generally displayed in a very narrow band of sizes, and where they differ greatly they are usually labelled as "for a fat woman" or "for a child".  There are a number of similar patterns for this type of gown in the book, starting with f.67a "A gown of baize for a girl", through to f.69a, the full sized adult version I'll be using here.

Of these, the four patterns F.68 through to f.69a are all the same adult garment cut in the same manner from fabric 2 ells wide, but with the variations being the length of the gown and length & width of the sleeves. The gown lengths range from the 'girl' version 98cm (approx 3' 2 1/2") long, to 112cm (approx 3' 8 1/8"), 126cm (approx 4' 1 1/2"), 140cm (approx 4' 7 1/8") and 147cm (approx 4' 9 7/8"). Each gown has correspondingly slightly larger sleeves until we get to the ones in the pattern I'm using here. If only the gown length varied I would assume they were stylistic differences, but as the sleeve lengths also get longer I'm suggesting that the variations are shown for different height wearers. It would seem therefore that the shorter garment length is a deliberate style element. There may be some leeway in adjusting the length of the garment a little, as Alcega mentions in the girl's version, but I am keeping the shorter length as was drawn, in order to try and stay true to what I think is the intention of the pattern.

In the descriptions for these patterns in the book Alcega makes mention of trimmings made from another fabric, and shoulder wings and 'ruffs' (tabs and other trims?) made from the scraps of the main fabric. So although the basic shape is fairly simple, there is clearly leeway for adding decorative elements to the basic gown.

Fabric
Alcega states that this gown requires a piece of fabric 3 1/6 ells long x 2 ells wide, or 266cm (approx 8' 8 3/4") long x 168cm (approx 5' 6") wide. The fabric is folded in half lengthways with the fold at the bottom of the diagram. There is no mention of nap or pattern in the fabric description, and the head to tail layout of this garment would imply a plain fabric.

Some mathematics and dimensions
I chose f.69a for this reproduction as the the sleeve length, shoulder seams, front and back neck openings etc are all the same as in the previous projects. I should therefor be able to draw on some of the work from previous projects, so I suggest you check out Project #6 and Project #7 for a more full description if you need more details. The gown length front and back from neck opening to hem is shown as 'bQQQ', or 147cm (approx 4' 9 7/8"). 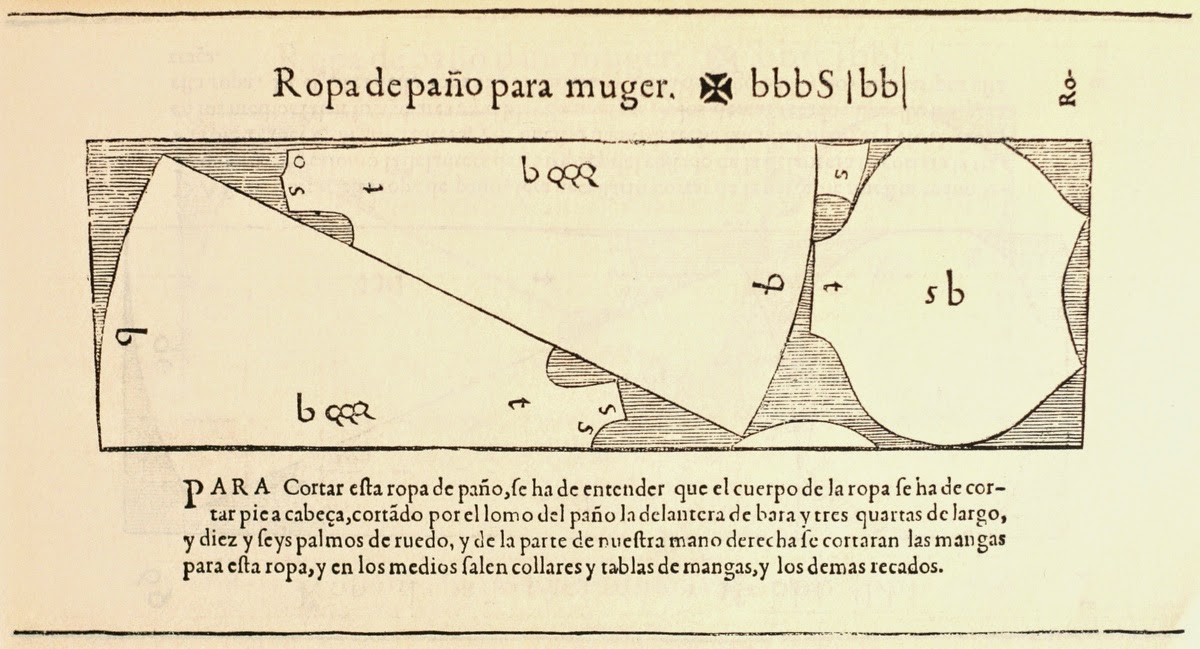 There is one question the gown length raises though, "bQQQ" is considerably shorter than the garments I have made previously measured from neck to hem. The gowns in the portraits above stop a little short in length, but not as dramatically as this pattern does. The fact that there are a number of patterns in the book for women of different heights seems to indicate that the shorter length is intentional and a design feature.

Sleeves
The sleeves do not have the exact same dimensions as the ones in the previous 2 projects, but are very similar except for width. Sleeve length is "sb" from wrist opening to sleeve head, or 70cm (approx 27 1/2"), and so a little longer than the doublet sleeves in the book. The wrist opening is "t' or 28cm (approx 11"), and although the sleeve head in this pattern is unlabelled, it is most likely "m" or 42cm (approx 16 1/2") as in all the previous versions of this sleeve. In this case the width of the sleeve is shown slightly wider than the full fabric width, with a small piecing to make up the width, and the curvature of the sleeve and sleeve head have minor differences in shape.

The gown front is cut along the fold, and the gown back along the selvedge. The gown back is similarly shaped at the upper back as in Project #7, and in this case the upper back curve is easily dealt with as it is part of a construction seam. This is a front opening gown, so the fold will need to be sliced open before it is assembled.

Collar
Curiously only the front collar is shown on the pattern, and in all the other sized versions. There is however mention of making the front and back collars from the scraps in the instructions of some of the other sized patterns. I'll be using the same collar from the previous project, two front "s" sized pieces and two back "o" sized pieces.

Developing the pattern
This is a relatively simple pattern compared to some others in the book. Only one piecing is required to make up the extravagant sized sleeve, and all other pattern pieces have minimal shaping.

The gown back in this pattern is also curved for the upper back, as in Project #7 the "Laced mourning coat of cloth for a woman". I used the same method of drafting the back by rotating the back piece of the earlier doublet pattern I had developed, although as this gown is shorter and has a narrow hem than the sack back gown I did not have to rotate it so much.

The gown front is actually drafted straight off the previously drafted doublet front to the point under the armhole, and then the side seam is angled outwards to match the length of the back side seam. I wanted to ensure that the upper portion of the body and shoulders remained fairly close fitting, as seems to be the style, so tried to only rotate the back pattern piece as much as necessary and not rotate the front at all. I then double checked that the hem width on the front piece was correct (1 ell) and the garment length was also correct. Thankfully all the dimensions worked perfectly, possibly one of the easiest drafts so far!

The other sleeves of this style in the book are usually 1 ell wide across, or 84cm (approx 33"), but this sleeve is a little wider and has a slightly more extravagant flare. It was fairly simple to draft, especially if you use a folded piece of paper as I did to ensure it was symmetrical. After drawing the wrist opening, marking the sleeve length from wrist to the lowest point of the sleeve head curve, then using a curving tape measure the draw the simple curve of the sleeve head to the correct size, I then drew the large outward curve to connect the wrist and sleeve head. After checking the width was a bit greater than 1 ell in total I sliced off the piecing and double checked it.

The collar piece I traced from the previous project, including the back piece which is required but not shown on the pattern.

Putting it together
This was a pretty simple sew, as the main construction is completed with a few long side seams. Once I had sewn up the side seams and shoulder seams, I then neatened the front edges by turning them under and stitching. I then made up the 4 piece collar as in the previous project, and matching the seams carefully applied it to the neck opening.

When it was time to move onto the sleeves I decided I needed to follow Alcega's advice and make some small wings for the shoulders from the remaining fabric. (There is no pattern piece for these.) I made a simple narrow 'football' shape, folded it along the long axis, and then sewed the curved raw edges along the armhole edge. I made them roughly 2/3 the size of the sleeve head, so they start just about the front under arm, and end at a similar point on the back.


I also decided it was time to switch things up in sleeveland. After finally finding a portrait with what appears to be this style of sleeve with a long front opening, instead of the horizontal cut I have been previously using, I went ahead and opening a long cut from almost at the sleeve head to almost at the wrist, along the 'fold' of the sleeve. (If you were making this up full sized you could then turn under a small seam allowance and carefully stitch the sleeve lining to neaten and stabilise this cut edge.)

Once the sleeves and collar were in I hemmed the garment and voila!, done. Pretty simple.

The sleeves don't look dramatically different from the ones in previous projects, except for the change in the style of opening. You and I know they are a little bigger though, and we went to all the effort of making a new pattern, and that's what counts. The sleeve head is drawn with only a simple curve, so there is a far amount of fabric bulk in the underarm after the sleeve is set in. During fitting and making you could probably work some of this bulk out and trim it away.


I always love the look of these sleeves at the back. 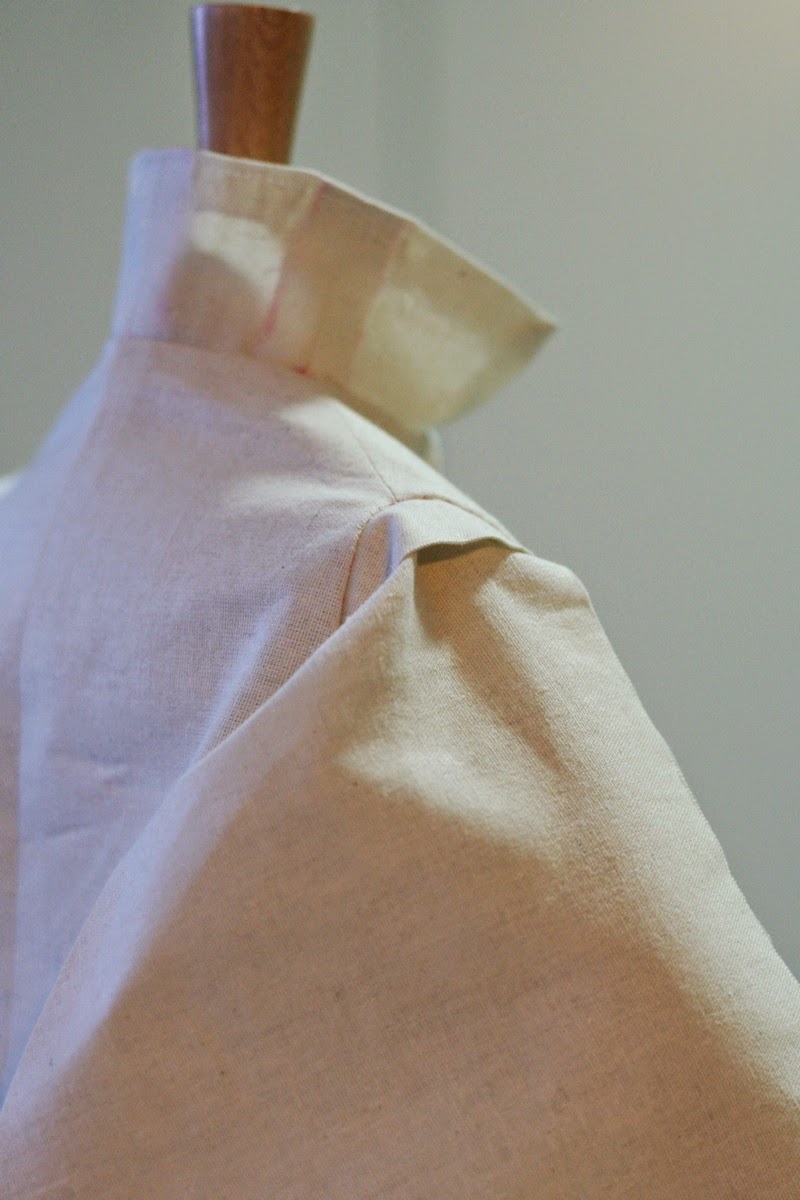 The only slight downside was that the shoulder wings impeded the outward curve of the sleeve back a little, creating that deep fold near the top. If I was making this full sized I would explore options such as tabs, a much narrower wing, or even a shoulder roll instead if that fold bothered me.


This picture above shows the only piecing in this garment, the inside of the sleeve back.

There you have it. A fairly simple garment but one that I think could make a useful outer layer for warmth. Perhaps fur lined, trimmed with contrasting fabric and braid, this could make a warm high status garment. Made up in a wool, with appropriate decoration, this could make a nice more middle class type garment.